When we bought a side of grass-fed beef from our friends at Gelinas Farm a while ago, we decided we wouldn’t let any part of it go to waste. Which means there are some items in our freezer that I don’t have much experience in cooking, the bits that are referred to (unappetizingly) as “offal.” You know – the innards.

And so I found myself last week pondering a frozen cow tongue, which I guess isn’t technically an “innard,” but it’s definitely considered offal. Remembering my late father had been a fan of pickled tongue sandwiches, and that I had, in fact, kind of liked the stuff as a child, I opened Hugh Fearnley-Whittingstall’s The River Cottage Meat Book in search of a recipe. HF-W (yes, he’s a Brit) is a lover of every kind of offal and sure enough, the Meat Book had lots of tongue recipes, including one for pickling it.

Pickled tongue isn’t pickled in the way we usually think of something being pickled, with lots of vinegar or with lactic fermentation. It’s actually just soaked for several days in brine – a mixture of water, salt, sugar and spices.

Now if you leave something in brine long enough, under the right conditions (proper temperature, the right ingredients) bacteria will create a lot of lactic acid, and that something will indeed turn sour – i.e., pickle. But in the case of pickled tongue, the meat is left in the brine just long enough to rearrange the tongue’s strong muscle proteins and turn them tender. So to call the tongue “pickled” is a little misleading – it’s really just heavily brined.

After being rinsed and soaked to remove the excess salt, and slow-poached with vegetables, the tongue – which is larded with a surprising amount of fat for such a strong muscle – becomes deliciously creamy/chewy, good either warm or cold.

It turns out the brine for pickled tongue is the same as the brine for corned beef. Seeing as Saint Patrick’s Day is just around the corner, I tossed a beef brisket into the brine along with the tongue and poached them together. The result was a corned beef far superior flavor-wise to any that I’ve ever bought in the grocery store.

There’s another upside to making my own corned beef and pickled tongue. I had the freedom to omit the preservative saltpeter (aka: potassium nitrate), which is an optional part of the brine recipe and is a standard ingredient in store-bought versions. Saltpeter is a preservative that keeps meat pink when it cooks, but it can also cause side-effects in those who eat it (I seem to get visual migraines when I consume too many nitrates), so I prefer not to eat it.

Homemade corned beef and pickled tongue can be used in dozens of ways: classic Reuben sandwiches, New England Boiled dinners, chopped up with potatoes and onions then sautéed for a traditional hash. Below you’ll find one of my favorite ways to serve them, a winter bistro salad made of tiny French lentils, roast beets, and cold-hardy mâche topped with a tart-creamy mustard dressing. The vegetables in the recipe are abundant in winter farmers markets. Mâche, in fact, is a self-seeding volunteer in my unheated 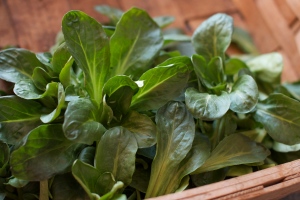 Mâche grows all winter in my unheated greenhouse.

greenhouse all winter long, surviving unscathed under a layer of floating row cover even when the temperature drops below 0°F.

And there’s another great reason to make your own corned beef and pickled tongue – the poaching liquid. This is abundant, delicious and well worth saving. Freeze what isn’t used immediately, then substitute it in any recipe for beef broth.

I made faux-pho with mine, mixing in a little Chinese 5 spice powder, then pouring the star-anise scented broth over rice noodles, sliced tongue and corned beef, topping it with fresh basil, cilantro and bean sprouts. It went together in a snap and was a perfect way to thaw out after a long cross-country ski.

Remove the herbs, onion and garlic from the lentils, drain them if necessary, then divide them between 4 plates, placing them on one side. Arrange several slices of corned beef and/or tongue over the lentils on each plate.

Toss the greens with a small amount of the vinaigrette then divide them among the plates next to the meat and lentils.

Arrange the beets between the greens and lentils on each plate. Drizzle the meat, lentils and beets with more of the dressing. Serve immediately, with dressing on the side, if desired.

To Brine the Meat:

Prepare the brine. Put the water, salt, sugar, bay leaves, peppercorns, cloves and thyme in a large pot and bring to a simmer. Allow to bubble a few minutes until the salt and sugar have dissolved completely, then remove from the heat and allow to cool before proceeding with the recipe.

Meanwhile, prepare the pieces of meat, by trimming them if necessary, and tying the brisket. The rough skin of the beef tongue may need to be scrubbed with a a soft brush to clean it up, but don’t go too crazy as the skin will be peeled off after cooking. Also, at the “root” of the tongue (the opposite end from the tip) there may be two small bones, the remnants of glands and some gristly bits; these should be trimmed away and discarded.

When the brine is cool, pour it (along with the herbs and spices) into a non-reactive container, like a large ceramic crock or bowl, that is large enough to also hold the piece(s) of meat. Submerge the brisket and/or tongue completely in the brine, weighing it down with a plate, sealed jar full of water or other non-reactive object so it stays beneath the liquid. Cover the container with a plate, lid or plastic wrap and place it in a cool place (the refrigerator is fine if there is room, otherwise in winter a cool – 40 degrees or below – but not freezing spot in a shed, garage or porch will do.

Leave the brined meat to soak for five days, turning it occasionally so that it cures evenly. On the sixth day, remove the meat from the brine (discard the brine), rinse it, then submerge it in a container full of cold water for 24 hours, changing the water once or twice during this time.

Remove the meat from the rinse water and place it and the remaining ingredients in a large, heavy, non-reactive pot and just cover with cold water. Place over medium heat just until the water begins to simmer. Cover the pot and turn the heat to low.

Cook the meat very slowly, just at the simmer, until it is very tender and easily pierced with a small knife. Depending on weight, this will take about 3-3½ hours for the brisket and 1½-2½ hours for the tongue (see note).

The corned beef may be sliced and served immediately. If you’d like to serve it later, place the beef and enough stock to cover it in a storage container, then chill it quickly by placing the smaller container into a larger container filled with ice and water (be careful the chilling water doesn’t spill into the stock). When cooled, place in the refrigerator where it will keep for several days.

For the tongue, remove it from the poaching stock, place on a plate or cutting board and let cool until it is still warm but can be handled. Using a small paring knife to get started,

peel the rough skin off the tongue and discard. There is a second layer of skin beneath this which may or may not need to be peeled depending on the size of the tongue. If it seems very thick, use the paring knife to scrape it off, too. The tongue is now ready to be served or may be chilled in the same way as the corned beef (above).

This will make more than enough for the recipe above. Use the remaining meat for sandwiches, etc.

Note: Alternately, the tongue may be par-poached for about 1 hour, cooled until it can be handled, peeled (as described above), then seasoned as desired and grilled (as you would a large sausage) or slow smoked to an interior temperature of 150 degrees.

In a small bowl whisk together the vinegar, mustard, garlic and salt. Whisking continuously, drizzle in the oils; the mixture should become very thick and homogenous. Stir in the heavy cream, dill and capers. Taste for seasonings and adjust as desired.

Rinse the lentils well, then place in a pot with the remaining ingredients. Bring to a simmer and cook for 25-35 minutes until barely tender, adding a little more water if the lentils look like they are getting too dry. When tender, turn off the pot and let the lentils cool a bit before using in the salad.

Preheat the oven to 375 degrees. Wash the beets well, trimming off all but about 1/2 inch of the stems (if there are any – use the beet greens for another recipe, if desired). Rub the beets with olive oil then place in a small baking dish and sprinkle with salt and pepper. Pour a little water in the bottom of the dish, then cover it with a lid or aluminum foil.

Bake for about 1 hour, until the beets are very tender. Remove from the oven and allow to cool until they are still warm but can be handled. Trim the top of the beet and the root, then slip the skin from the flesh – it should come off easily.

If you’d like to make hearts, slice the beets into round about 1/3 inch thick, then use a small heart-shaped cookie cutter to punch hearts from the rounds. The remaining bits of beet can be chopped into a dice, if desired, and scattered on the plate, too, or reserved for another use. Otherwise, cut the beets into bite-sized pieces, as desired.