February’s full moon is known as the “Hunger Moon.” It wasn’t so long ago that people

would face empty larders at the end of winter (in undeveloped countries people are still at risk for seasonal starvation). And even though these days relatively few Americans are at risk of dying for want of food, by the end of winter our bodies are longing for the spring tonics of early bitter greens, sunshine and best of all, the warm brown scent of thawing earth.

Which may be why potatoes are such a comfort to us during these dreggy days. They smell of the earth, don’t they? And they even taste of it in a good way – elemental and solid. Too, potatoes are one of the few vegetables (they’re actually a tuber) whose flavor improves with storage. According to Harold McGee, author of my favorite book of kitchen science, On Food and Cooking: The Science and Lore of the Kitchen, during proper storage (in the dark at temperatures between 45 and 50 degrees) the enzyme activity in potatoes “generates fatty, fruity, and flowery notes.”

Different kinds of potatoes have different kinds of starches. Waxy potatoes, the red and white skinned varieties, have cells that hang together when cooked, giving them a dense texture that’s good for potato salad but can turn to glue when mashed. Russets (aka baking potatoes) have a lot of dry starch in their cells that tends to swell up when they’re cooked. This results in a dry, mealy texture that’s perfect for mashed potatoes.

And mashed potatoes, to my mind, are the perfect comfort food to see us through the dregs of winter. They’re full of vitamin C to fight off colds, and they’re high in energy to keep us warm out in that colder-than-cold end-of-winter weather. If you think mashed potatoes need gallons of cream and butter to make them delicious, think again. I mash mine (using a potato masher or ricer – NEVER a food processor, which turns them to wallpaper paste) with hot skim buttermilk and a little salt and they’re terrific.

Somehow, I’ve always got leftover mashed potatoes – a byproduct of cooking, when I was growing up, for three potato-hogging brothers. Below you’ll find a couple of ideas for your leftovers. Be warned though – these, unlike my buttermilk mashers, are full of fattening things like cheese and butter. Enjoy!

The Golden Monkey Ring recipe from The Fannie Farmer Baking Book used to make a regular appearance at the brunches I baked for back in my catering days. It’s like a giant sticky bun – impressive to look at and fun to eat. Kids especially love picking the gooey balls off of it. I decided to gild the lily by turning each ball of dough into a miniature take on my favorite Chinatown treat – coconut butter buns. The addition of tart chopped apricots to the coconut filling adds a nice balance to a dish that is over the top with carmelized sugar and butter. If it all looks too complicated for you, feel free to skip the coconut filling and simply proceed with the recipe using unfilled balls of dough.

This dough holds well in the refrigerator or freezer, so it’s a great make-ahead for a brunch party. It’s also readily adaptable to all sorts of fillings and permutations – just use your imagination and whatever you have on hand. Remember to save some of the water from your boiled potatoes for this. If you forget, just substitute an equal amount of warm milk.

Soften the yeast in the potato water for 5 or 10 minutes then stir in the potatoes, sugar, salt, egg and butter. Stir in the whole wheat flour and mix well. Begin adding the white flour, one cup at a time. You should wind up with a moist, slightly sticky dough. If needed, add a little more flour until the dough is workable. Turn out onto a lightly floured counter and knead well for 5 or 10 minutes, until the dough comes together in a smooth ball that springs back when you poke it.

Put the dough into a large, greased bowl and cover with plastic wrap. If you want to proceed today with the recipe, leave the dough in a warm place to rise. Otherwise, the dough may be stored in the refrigerator for a few days at this point, or frozen for up to a month. While the dough is rising, make the coconut apricot filling.

The dough is ready to use when it has doubled in bulk, about 1-2 hours. 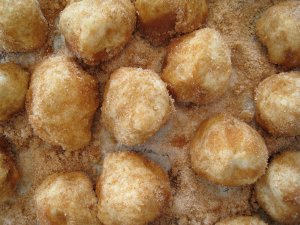 Put all the ingredients except for the apricots into the bowl of a food processor and process until the mixture is well combined – all the butter should be completely incorporated into the mixture.

To assemble the cake:

Preheat the oven to 350 degrees (325 degrees if you have a convection oven).

Thoroughly grease a 10” Bundt pan with the 2 Tbs. of softened butter. Make sure you get all the nooks and crannies and don’t be tempted to use shortening or a spray-on for this step as the butter will be combining with the sugar as the cake bakes to make a caramel crust.

Combine the brown and white sugars and the cinnamon on a sheet tray. Put the melted butter into a wide bowl.

Turn the risen dough out onto a lightly floured counter and gently pat it out into a rectangle. Using a sharp knife cut the dough into quarters. Divide each quarter into eight even pieces. You should wind up with 32 pieces.

Pat each piece into a small circle. Top each circle with about 1 Tbs. of the coconut mixture and a few pieces of chopped apricot. When all the coconut and apricot have been evenly divided among the pieces, pull the edges of the dough up over the filling to cover it completely and to form balls.

Dip each ball in the melted butter and then roll the dipped balls in the cinnamon sugar mixture. Layer the balls snuggly together in the Bundt pan, sprinkling the walnuts in-between layers of the balls. When all the balls have been placed in the pan, sprinkle any leftover sugar mixture over the top.

Bake for about an hour, turning once or twice to ensure even baking. The cake is done when an instant read thermometer inserted into it reads 200 degrees. Allow the cake to rest for 5 minutes and then carefully turn it out onto a cake plate. Don’t let it cool in the pan or it will stick. Don’t bother trying to cut this cake – simply allow your guests to pull individual balls off of it.

This recipe was inspired by a recipe in Brian Yarvin’s terrific cookbook A World of Dumplings. “Kroppkakor” are Swedish potato and bacon dumpling cooked in boiling water. I loved the sound of potatoes and bacon together, but I’m not a big fan of the European tradition of boiled dumplings – stolid, lumpen things that make me think of a dinner scene in an Ingmar Bergman movie.

My much cheerier take on the potato-bacon dumpling is a cheesed-up gnocchi dough disk stuffed with savory goodies and cooked on a hot griddle until it’s crispy on the outside and gooey on the inside. Delicious as a main course with a salad on the side, smaller wedges of the cake are portable enough to serve as hors d’oeuvre.

Below are recipes for two fillings – a bacon-onion-red pepper version as well as a vegetarian cabbage-apple filling – but this dish would lend itself to all sorts of variations, especially if you happen to have some leftovers you need to use up.

Combine all the ingredients except the cheese very well until you have a smooth dough; a food processor works well for this. Stir in the cheese. The dough will be quite sticky and is easier to work with if you lightly wet your hands.

Put a heavy skillet or griddle on to heat. Well-seasoned cast iron may not need any additional oil or butter.

Meanwhile, divide the dough into quarters. Working on lightly floured parchment or wax paper, pat 2 of the quarters into rounds approximately 6” in diameter. Top one of the rounds with half of the filling mixture. Carefully flip the other round onto the filled round and gently seal the edges of the rounds.

If needed, put a tsp. or two of butter or oil into the hot skillet and spread it evenly over the pan. Now, using the parchment paper to lift it, carefully flip the potato cake into the pan. While the first cake is cooking, proceed as above to assemble the other potato cake.

Cook the cake for 5 or more minutes on each side, until it is golden brown on both sides and the dough has puffed slightly and no longer looks raw (it will remain very moist). Serve immediately or hold in a warm oven until the other cake is finished cooking.

Saute the bacon in a heavy skillet. When it gives up some of its fat, add the onion and red pepper, rosemary and black pepper. Cook until the bacon is browned and the onions are soft and lightly caramelized. Lift from the pan using a slotted spoon so the fat remains behind; set aside to cool a bit. You may use a small amount of the bacon fat for cooking the potato cakes, if you like.

Heat a heavy skillet. When it’s hot, melt the butter in it and then add the cabbage, apple and onion. Saute until the vegetables are translucent and beginning to get a little golden. Add the dill and the cider vinegar. If you like, add the heavy cream. Cook a minute or two then add salt and pepper to taste. Set aside to cool. If desired, you may sprinkle additional cheese over the filling, ½ cup per cake, before putting the second dough disk on top of it and sealing.