This recipe is based on one in Maricel E. Presilla’s great cookbook, Gran Cocina Latina. 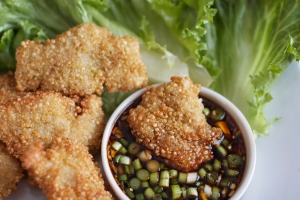 It’s an interesting use of quinoa – as the crust on fried chicken fingers. They are delicious,especially with the dipping sauce, and they stay crisp for a long time.

I tried two ways of cooking the chicken – frying it in hot oil, as well as baking it in a hot oven on a well-oiled sheet tray. I prefered the traditionally fried chicken, but baking did work as well; just be sure to flip the chicken halfway through cooking so it browns on both sides.

I’m guessing this might not work quite so well with whole pieces of bone-in chicken; I suspect the quinoa would overcook and burn, but it might be worth a try. I do think, though, that this recipe would work well when frying sturdy fish fillets, such as catfish.

For the Dipping Sauce:

Combine the quinoa with 5 cups of cold water and 1 teaspoon of salt in a pot large enough to hold the mixture comfortably. Bring the mixture to a boil, stirring occasionally, over medium-high heat. Turn the heat to low and continue cooking the quinoa for another 5-10 minutes, just until tender; the center of each grain of quinoa will look translucent and the “tail” that wraps around the grain will be white.

Pour the quinoa into a strainer to drain, but don’t rinse it. Spread the drained quinoa on a sheet tray to dry a bit more.

While the quinoa is cooking, combine the garlic, orange and lime juices, the cumin, the remaining salt and several turns of freshly ground black pepper in a non-reactive dish big enough to hold the chicken pieces in a single layer. Add the chicken to the marinade, turning it to coat both sides well. Cover with plastic wrap and place in the refrigerator for an hour.

Put the flour into a wide, flat dish or tray. Next to it, place the bowl of  whisked eggs, then place the cooled and dried quinoa on a tray next to the eggs.

Dip each piece of chicken in the flour to coat it lightly, then dip in the whisked eggs, allowing the excess egg to drain off the piece of chicken before dipping it in the cooked quinoa. Press the quinoa gently around the piece of chicken so the coating stays put, then place the chicken carefully on a plate. The coated chicken may be refrigerated for several hours until you are ready to cook it. If cooking immediately, make the dipping sauce first.

Remember that raw chicken can be contaminated with salmonella and other bacteria, so it is essential that you keep the dipping sauce (which will not be cooked) well away from raw chicken juice. Be sure to wash your hands well before touching any of the dipping sauce ingredients and be sure that you do not contaminate the ingredients by allowing them to come into contact with a cutting board or knife that has been used in preparing the chicken.

Place all the dipping sauce ingredients in a small bowl and whisk well to incorporate the honey. Set aside until the chicken is cooked.

If frying the chicken, heat the oil in a heavy pot, or large heavy skillet; the oil should be an inch or two deep. When the surface of the oil shimmers, slide one piece of chicken into it. If the chicken bubbles around the edges, the oil is hot enough. Continue adding pieces of chicken to the oil, but don’t crowd the pot or the temperature will drop and the crust won’t brown properly. You will need to cook the chicken in several batches, adjusting the temperature of the oil as needed to brown the pieces evenly.

As the pieces of chicken turn golden on the bottom (this will take only 2 or 3 minutes), carefully flip them over so they can brown on the other side. When the pieces are brown on both sides, lift them out of the oil and set them on a tray lined with paper towels to drain, then place them on a sheet tray in a warm spot while you cook the rest of the chicken.

Serve the chicken hot, with dipping sauce on the side.