What to do with lots of fresh eggs: Goat Gouda and Pecan Meringues with Fresh Greens and Lemony Herb Dressing and Boston Cream Cupcakes

The flock of Black Jersey Giant hens I share with my sister-in-law has just turned four, and they’re still laying more eggs than our two families can absorb. Getting rid of the excess is no problem, though – actually quite the opposite. 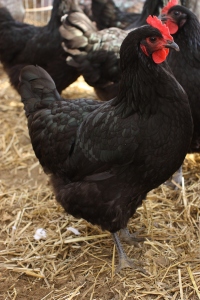 Okay, I’m going to brag a little here; forgive me. Our eggs are really good. Our chickens are true free rangers, spending most of the day outside eating bugs and greens. The proof of their excellent diet is in the egg yolks, which are calendula orange, so bright that when I make cakes with them, the batter looks as if I’ve dyed it with yellow food coloring.

Here are two egg-rich recipes. The first is for a whites-only nut and cheese meringue cracker that’s a delicious contrast to spring greens. The second recipe is a good way to use up the leftover yolks, Boston Cream Cupcakes, light enough that you’ll want to eat two, but rich enough that you should probably only eat one. The pastry cream recipe makes more than you’ll use filling the cupcakes, but it’s delicious on its own or topping fresh berries or stewed rhubarb.

Preheat the oven to 300 degrees. Line a half-sheet tray with parchment paper; butter and flour the parchment. Set aside.

Place the pecans, cheese, salt, and peppers in the bowl of a food processor and pulse until the nuts are finely chopped. Be careful not to pulse so much the mixture turns into a paste.

In the bowl of an electric mixer whip the egg whites and the pinch of cream of tartar using the whisk attachment until the whites form soft peaks. Fold the nut mixture into the whites carefully, trying not to deflate the whites completely.

Spoon the batter evenly into 8 spots on the prepared parchment, leaving lots of space between the spots. Use a spoon to flatten and spread into approximately 4 inch wide rounds – don’t let the rounds touch.

After 1/2 hour, remove the tray from the oven and allow the meringues to cool completely. To serve, place each meringue on a plate. Toss the greens with the dressing, then top each meringue with greens. Serve immediately, before the meringues get soggy.

In a small bowl, whisk together the lemon juice, vinegar, salt and minced garlic. Gradually whisk in the oils, dribbling them in slowly so the mixture emulsifies. When all the oil has been added, whisk in the herbs. Makes about 3/4 cup. 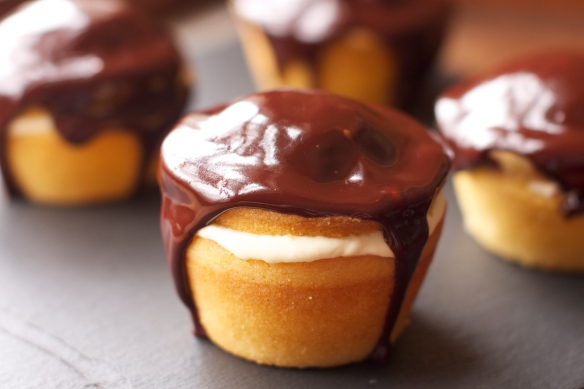 For the cupcakes (adapted from Cook’s Illustrated: The Science of Good Cooking):

Place the dry ingredients in the bowl of an electric mixer and stir gently with the paddle to combine. Add the butter a few chunks at a time while mixing gently. As the butter is cut into the dry ingredients, add more butter until it is all mixed in. You should wind up with a mixture that resembles coarse cornmeal.

Add the eggs, one at a time, combining well after each addition. Finally, add the milk and vanilla. Beat well a minute or two until light and fluffy.

Divide the batter evenly between the 12 cupcake impressions. Place in the oven and bake, turning once for about 20 minutes. The cupcakes are done when they have risen and spring back when touched in the center. A toothpick inserted in the center of a cupcake will come out clean. Try not to over-bake.

Let the cupcakes cool a few minutes before gently lifting them onto a cooling rack. Let them cool completely before filling and frosting.

To fill, cut the top off each cupcake and use a small sharp knife to cut a cone shape out of them – leave enough cake on the bottom and sides so that the cupcake doesn’t fall apart. Fill the cavity with pastry cream, enough so that a little squeezes out the side when the top is replaced. Spread the top of each filled cupcake with some of the chocolate frosting, enough so that it drips down the side. Chill the cupcakes until they set, then serve. Makes 12.

Have ready a sieve fitted over a clean bowl, a whisk, and a wooden spoon. Place the milk in a medium saucepan. If using the vanilla bean, split it in half lengthwise and scrape the seeds into the milk. Add the bean halves to the milk along with about ⅔ of the sugar. Heat the milk over medium heat until it is just about to simmer.

Meanwhile, place the yolks in a medium bowl and whisk in the remaining sugar. Continue whisking for about a minute, until the yolks are lighter in color and a little thicker. Whisk in the sifted flour.

Heat the mixture over low, stirring constantly with a wooden spoon. Scrape the the pot with the spoon to incorporate the thickening mixture on the bottom back into the thinner mixture on top. Occasionally whisk the mixture briskly to break up lumps. Continue cooking the mixture, stirring constantly, until it just barely begins to bubble; it should be very thick. Pour the pastry cream through the sieve into the clean bowl. Stir the cold butter into the pastry cream until it melts and is completely incorporated.

Place the bowl of pastry cream in a cold bath of ice and water in a larger bowl being careful not to let any of the water get into the cream. Cover the surface of the cream with a piece of plastic wrap to keep a skin from forming on it as it cools. When the pastry cream is cooled, you may place it in the refrigerator for up to a day before proceeding.

Combine the first three ingredients in a small pot and heat over a low flame microwave. Stir gently until the chocolate has melted and the mixture is homogenous. Remove from heat and stir in the butter until it has melted and is incorporated. Allow the mixture to cool a little before using to frost the cupcakes. Makes about 1¾ cups.