I know it might be hard to believe, but there was a time when the only place a person could buy a decent bagel was in a big city kosher bakery. I had never even heard of a 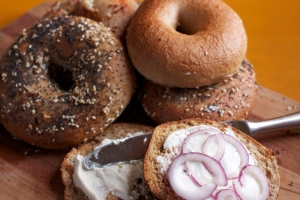 bagel until I was seventeen and the grocery store on Cape Cod where I was a cashier began carrying the frozen Lenders version at the request of summer people from places like Boston and New York City.

I was still a bagel neophyte when, a few years later, my college boyfriend took me home to meet his Brooklyn-born parents. They decided I was definitely not the girl for their son when I turned up my nose at lox and cream cheese and requested mayonnaise for the bagel from which I was scraping away the poppy seeds.

Now I eat bagels – with cream cheese – at least once a week. I buy them by the dozen from The Works Cafe in Concord, cut them in half, throw them in the freezer, then pop them in the toaster as needed, and they’re wonderful. But one day recently we ran out of our frozen stock and, because I wasn’t planning to make a trip to Concord any time soon, I decided to try making my own.

Making good bagels at home, it turns out, is a little more complicated than making a good loaf of bread at home. First of all, the dough, which is stiffer than regular bread dough, has to be kneaded for a long time to properly activate the gluten in it. And because the dough begins with a “sponge” (a loose mixture of flour, water and yeast), and because bagels have to spend the night in the refrigerator to ferment and develop the best flavor, you’ll need to start a day ahead of time. Furthermore, the bagels have to be boiled before being baked to set the gluten in the crust, which makes the finished product shiny and crunchy on the outside and moist and chewy on the inside. END_OF_DOCUMENT_TOKEN_TO_BE_REPLACED

Sometimes a recipe that seems easy turns out to be vexingly difficult to pull off. Cheese fondue is a case in point. The list of ingredients couldn’t be simpler – not much more than 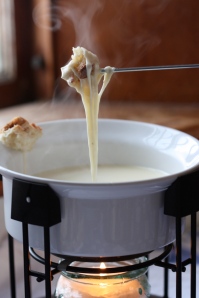