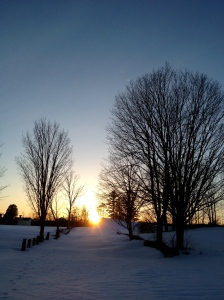 Every season has its Trio of Delight. In mid-March the troika is: 1) almost twelve hours of light a day; 2) cross-country skiing on corn snow; 3) steamy sugar houses where maple sap boils over wood fires.

My in-laws, who own North Family Farm here in Canterbury, NH, seem to never sleep during sap season. Maple syrup is nearly half their living (the other half is a combination of hay and wood). It’s hard work, all the tapping and sap-hauling and wood burning and syrup boiling. Never mind the canning and promoting and selling and shipping.

In August, dragging a crate of maple syrup to a farmers’ market feels old. But now, in March, when the sun is rising higher in the sky day by day, and the air is warm enough to stand in for a coat, and the red-winged black birds have returned with their dopey cowbird step-brothers, and the sap isn’t just running, it’s gushing – now, gathering sap and making syrupfeels likes the best job any person has ever had in the history of the world. 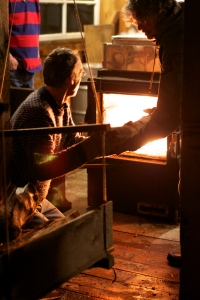 Unless, maybe, you have the job of creating recipes for this year’s fresh-out-of-the-sugar-house maple syrup. So far, it’s Grade A Light Amber. And it’s sublime.

I am tempted to say that you could replace the maple syrup in the recipe for Roast Chicken with Maple, Garlic and Smoked Paprika with another sweetener – brown sugar, maybe, or honey. But don’t. This recipe is really good just as it is. And if you don’t happen to have any smoked paprika on hand (it’s pretty easy to find in grocery stores these day) use regular paprika, or take a chance and substitute any herb or seasoning that strikes your fancy.

As for the Maple-Almond Praline Roulade, the recipe looks long and complicated, but really is pretty fast and easy to put together. The hardest part is making the praline, and that could be left out completely if shy on time or ingredients. Keeping in mind that maple is a subtle flavor, and that the roulade is worth savoring on its own, it would also be delicious with a sauce made from frozen berries, or, in season, fresh ones. END_OF_DOCUMENT_TOKEN_TO_BE_REPLACED

March is the month when gardeners begin starting seeds inside and eating the last of the vegetables stored in their root cellars. They’re called “root” cellars for a reason, because roots, like carrots, rutabagas, storage radishes (such as daikon) and beets, are what keep there best.

This is because most root vegetables are designed for a winter of storage below ground. They’re biennials; that is, they live for two years. The first season, they turn out leaves above ground for photosynthesis, and large swollen tubers below ground in which to store energy for the following year. If left in place or replanted in spring, these tubers would send up flowers in their second year of growth, go to seed, and, having reproduced successfully, die.

At the end of the winter, stored root vegetables have a remarkable ability to tell that their second growing season is approaching. They sprout new leaves and use up their stored sugars, going limp and bitter. It’s time to use them up and seed in new plantings.

Beets are one of my favorite root vegetables, sweet enough to moisten a cake, yet full of antioxidants and folates, B vitamins and potassium. Raw grated beets tossed with lemon juice and olive oil make a great salad; roasted beets are delicious tossed with butter and dill, or in one of these recipes: 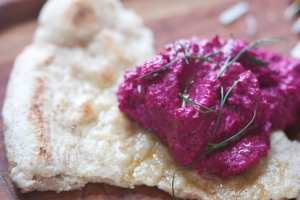 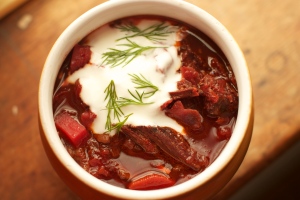 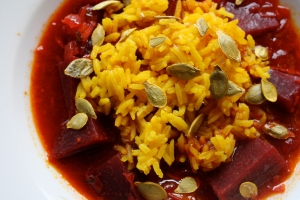 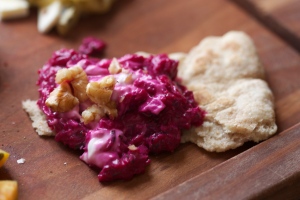 I recently picked up Paula Wolfert’s beautiful cookbook, The Food of Morocco, in which Wolfert extols preserved lemons as “the most important condiment in the Moroccan 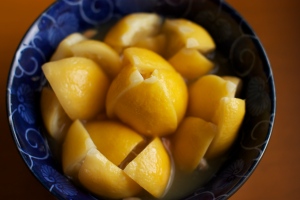 larder.” Fresh lemons, she warns, are no substitute, and I agree.

Brined in sea salt and lemon juice, then fermented for up to a month, preserved lemons take on a melting texture. Their flavor becomes more complex and mellow, as the tang of lactic acid fermentation melds with the lemon’s natural acidity. So while most of us wouldn’t want to eat more than a nibble of raw lemon peel, preserved lemon peel is as addictive as good olives; in fact, olives and preserved lemon are a classic combination in Morocco’s famous tagines.

Preserving lemons at home is easy. All you need are good quality organic lemons (conventional lemons harbor too many toxic chemicals), sea salt and a jar. How long the END_OF_DOCUMENT_TOKEN_TO_BE_REPLACED